Made of smooth, glossy, single density Tantus silicone, the Slow Drive is firm, but it still has some flex and give. It features a curved tip for g-spot or prostate stimulation, and it has a flared base, so it can be used in a harness.

I’ve also tried the Slow Drive anally since it’s manageable for my butt ((and because I wanted to know what it feels like to be fucked in the ass by a pirate)), and I can get some subtle g-spot pressure from it that way. I tried it on Jake (by hand) as well–he’s still fairly new to prostate play, and when I asked him how it was after using it on him, he said it felt nice but not super intense. I haven’t tried it for pegging, but since it’s harness compatible it could be used that way, though I’d probably go with the Slow Drive Long for that, since it’s rather short.

My main complaint about the Slow Drive is that it’s not available in the gorgeous, glowing lime green anymore, though I’m thankful it still comes in the lovely, shimmery silver version I have. Its unique triangular base is also slightly less comfortable for me to hold than classic round bases, but it’s not a big deal. On the plus side, the unique base means you know which way it’s pointing, which is helpful if you’re using it on someone else. Also, the Slow Drive might be too short for some, so if you prefer more length to hold on to, check out the Slow Drive Long. 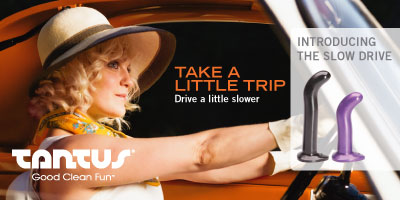 This site uses Akismet to reduce spam. Learn how your comment data is processed.

This blog contains adult and NSFW content. If you are under 18 or below legal age in your country, please leave and come back when you are of age.

Copyright © 2011-2020 Penny’s Dirty Thoughts. All rights reserved. No part of this website may be reproduced or transmitted in any form or by any means, electronic, mechanical, photocopying, recording or otherwise, without prior permission of the website owner.